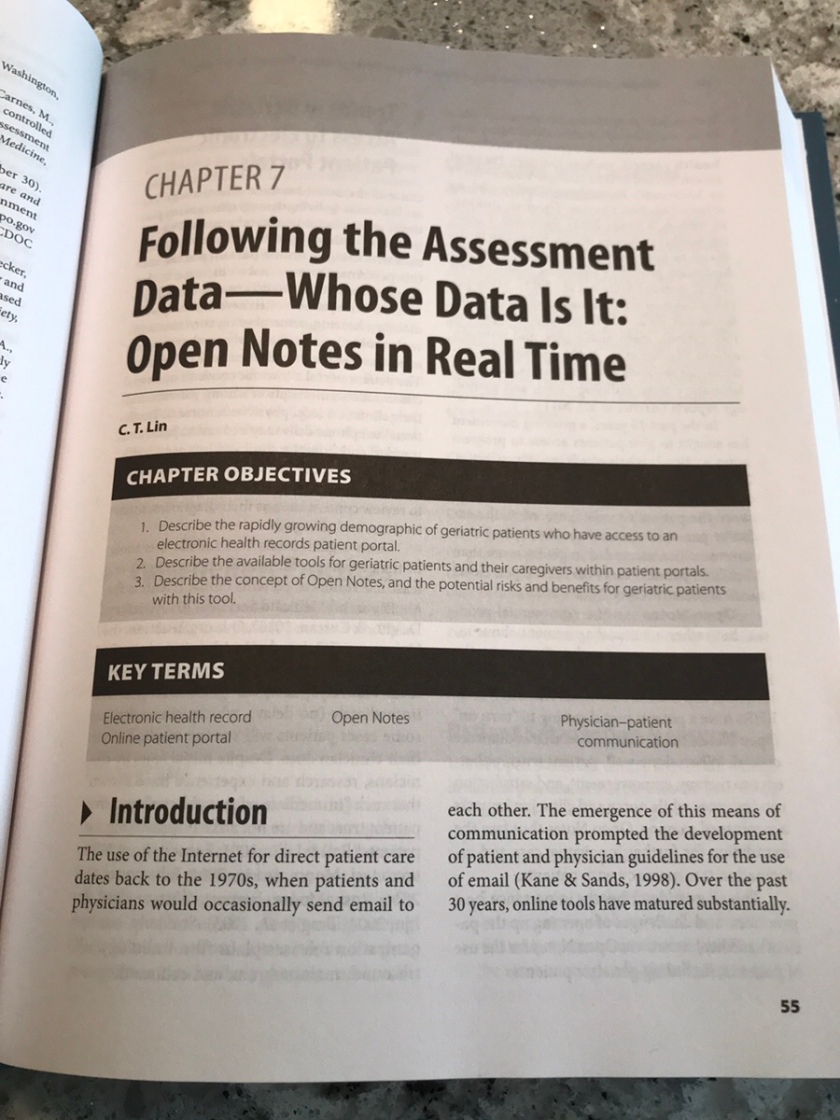 So happy that my book chapter is now in print! Thanks to the John A. Hartford Foundation and Terry Fuller, the book’s indefatigable editor for shepherding this project to completion over the past year. Even more importantly, thanks to my lovely wife Esther Langmack for her many (many) red-inked editorial ‘suggestions’ which turned my tortured writing into something worth reading. 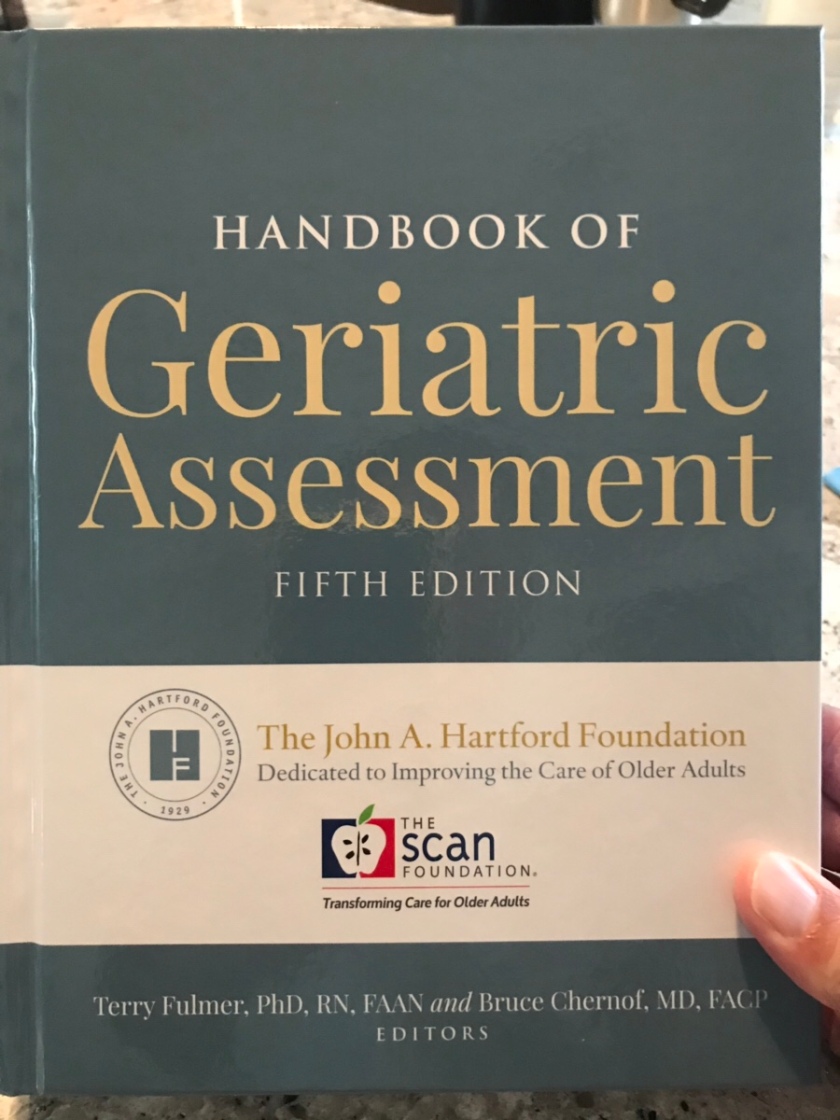 It is a beautiful, thoughtful book, with contributions by important people, like Dr. Karen DeSalvo, the former Assistant Secretary for Health. And then, I also contributed. 🙂

The book discusses all aspects of care of older patients. I delve into the research and practical literature around Electronic health records, specifically online patient portals, and how our older patients have used it effectively. Moreover, healthcare organizations that have adopted online communications, Open Test Results and OpenNotes have increased value to older patients and their families by making more patient information transparent and shareable, and improving medical care overall. Online access and online care is not just for healthy millennial patients anymore.

CMIO’s take? Hooray, recognition that the internet revolution is finally making a dent in healthcare, including for older patients. Thanks to all my research and clinical colleagues for terrific work, insights and friendships.

Thanks to videographer @DrDannySands for taping my latest spontaneous ukulele performance of “Doc Prudence” a uke parody song and cautionary tale (not really) about Open Notes at #sgim18 (Society of General Internal Medicine, national meeting in Denver last week).

There is a risk, in a large and growing IT organization in a large and growing health system (we’re up to 9 hospitals, 400 clinics) is getting disconnected among the hundreds of employees and colleagues within this unit. We certainly don’t have all of it figured out, but there are proud moments when we do something good…

(like untalented folks playing ukulele – see https://youtu.be/EC6yXXYl1vY) (as an aside, did you know that YouTube now AUTOMATICALLY generates closed caption content?) (although bad singing apparently still stumps it!) (and, there is a tool for humans to correct the computer-generated text) (hey, everybody, just like transcriptionists everywhere, who are employed by companies applying Speech Recognition to incoming physician dictations BEFORE having a human correct the computer generated text, I’m now also officially a Correctionist! the new title, apparently, for transcriptionists doing this new work).

Whew! I’ve always wanted to create a parenthetical aside that took on a life of its own (see my previous review of the book Mezzanine for the most artful and entertaining example of massively meandering asides).

Nevertheless, after some initial hesitance, gradual persuasion, and some non-standard funding, we’ve had a ping-pong table ensconced in the midst of our IT building for several years. 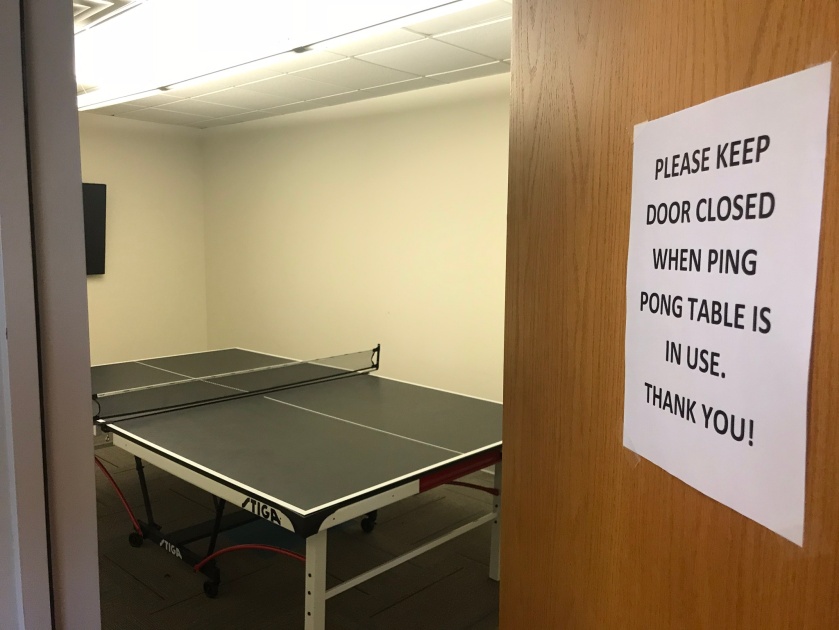 Okay, so we haven’t always been as quiet as we should be, to avoid disturbing those unfortunate enough to have a cubicle near the Ping Pong room. And, yes there is always the persistent business pressure of converting that conference room back into more offices, but we have held on (so far).

Use of the table is sporadic, and I feel, insufficient to deliver the quantity and quality of potential joy and human connection that comes with such an unexpected resource. In other words: HEY PEOPLE WHERE IS EVERYBODY.

I know, West Coast start-up companies all have ping pong tables and foosball, and the perks to attract millennials and them younger folks who, I’m told, are constantly joining the workforce. Sure. I’m just an aging boomer trying to keep up.

WHICH brings me finally to my point. After years of inertia, I put the finishing touches on my Ping Pong Ladder last night, and mounted it with some help (and, an IT colleague’s pen that has a built-in Level!)

This is a flashback to my heady days, in college, of being the Athletic Director in my dorm, and trying to convince my classmates that playing an intramural sport actually helps reduce stress and improve academic performance. In those days, I built and posted a ping-pong ladder in the basement of our dorm and had an active cadre of about a dozen classmates with more enthusiasm than skill, and had a grand time.

However, the contrast here, is (okay, you can stop laughing now).

The contrast here is, nobody knows what a ping pong ladder is! Really?! “Hey,  when is the tournament?” “How does this thing work?” There’s a bigger social commentary here, too much FaceTime and not enough face time. Too much texting and not enough bowling. If you haven’t heard about or read Putnam’s amazing critique of the modern age, Bowling Alone, (TL;DR) at least read the synopsis, like I did.

I had to explain the underpinnings of the Ladder to several colleagues; that you challenge up to 3 spots up the ladder, and if you win, you take their spot and everyone else moves down, and that fundamentally, it is about social connections, finding someone to play ping-pong with, and having a social construct, an excuse to blow off some steam, have a chat, get some blood flowing, and then get back to work. No need to even break a sweat if you don’t want to. The good news is, everyone has either played ping pong or is willing to try. At least that is my hope.

Did you know, by the way, that official ping pong rules changed decades ago? Seriously? I learned that a game was first to 21, that you served 5 times in a row then switched, etc. Now, games are to 11, and you switch EVERY 2 SERVES. Apparently, nobody has time anymore. But, games do move more quickly, and more folks do get to play. So there’s that.

And of course, thanks to the first followers; it would be a sad day if my tile was the only one on the ladder. We had 19 colleagues put up a tile on our first day. Hooray!

CMIO’s take? Do you have a ping-pong ladder? or have you had to explain some ancient social norm recently to a younger colleague? Do we even think Ping Pong Ladders can survive in this modern age? Or is it time for the Boomer and his sad Ladder to walk into the sunset? Let me know.

My smarter and hipper younger sister is loaning me her Muse brain sensing headband, knowing that I have developed a recent interest in meditation.

I have to say, I went through some rapid-cycle opinion changes on this device:

Despite my schizophrenic waffling on this, I convinced my generous sister to offer the headband to me on a long-term, no-collateral loan. Best middle sister ever.

CMIO’s take? Sometimes it is fun to use technology to disconnect from technology and look inside yourself. Yes, I know that I am a collection of clashing contradictions. That’s my thing. 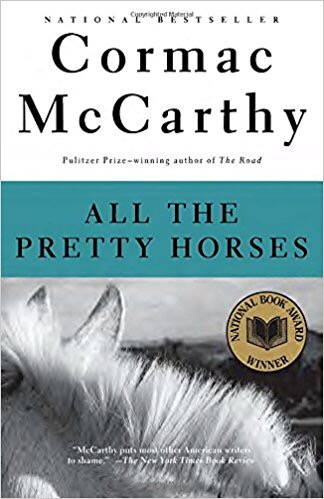 Another book pilfered from my daughter’s bookshelf, reading for her seniors English course. Published in 1992, and a National Book Club winner.

Polysyndeton is one of many words my daughter can now use to show that my command of the English language diminishes daily. Apparently McCarthy uses repeated ‘ands’ to create flowing, breathless descriptions to overwhelming effect on the reader.

This is the story of John Grady Cole, a man who crosses the border into Mexico after his father dies and his adventures there and the bubbling emotions under the surface and the wide open spaces and the horses, so many horses, and falling in love, and prison, and fighting for his life, and escape and, maybe redemption.

CMIO’s take? People had real adventures before smartphones and GPS and Uber. Put down your electronics and read something simple and powerful. Of course, you’ll have to log in again to blog about it …