We walk past these structures every day. When I ask my colleagues, none of them know the history of these objects.

The Art Walk / Globe Sculpture represents the connection between healthcare education side of the campus, and the research / clinical side of the campus. Beginning on the education side, a solid sphere is positioned adjacent to the Education quadrangle, 5 buildings where five schools share classrooms and resources (see link to walkabout blog). Down the long, uninterrupted sidewalk, you can see that the sculptures all line up, through various archways, to the final sculpture on the research and clinical side of the campus, represented by the wireframe sphere.
A nice metaphor: the undifferentiated form of a sphere could represent an the raw idea, the unsophisticated view of healthcare, where the underlying principles are unseen. On the other end, traveling through time and space, and the years of a healthcare education, the wireframe represents the discovery and use of hard-won knowledge of the underlying structure of the sphere, to be employed in the discovery of new knowledge and the use of this knowledge in the care of patients and populations. 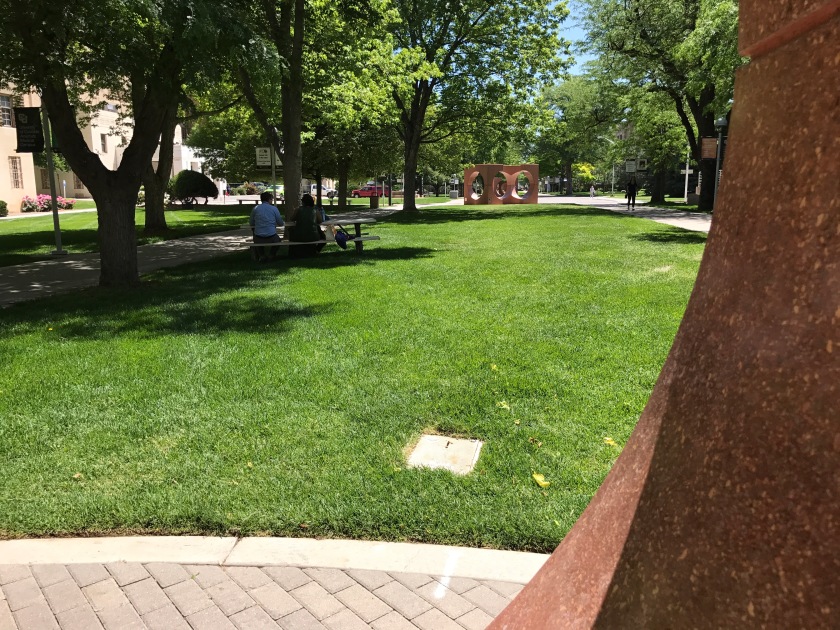 For me, it is reminiscent of the metaphysical Fuzzy/Techie line at Stanford University, represented by an imaginary line dividing the scientific side of campus and the arts side of the campus. Ours is better, methinks.

Little known fact: All these sculptures have power outlets and free wi-fi!

CMIO’s take? Cool things abound, all around us.

So often, we look to our leaders for big ideas, for revisions, for ways to think about our world and aspire to be better. For example, John F. Kennedy’s “We choose to go to the moon, not because it is easy, but because it is hard.” I have been reminded repeatedly, in recent days, that we currently lack public figures to whom we can look for aspirations and hopes.

Elon Musk is a notable exception. See his 45 minute TEDtalk interview from 2017, below.
https://www.youtube.com/watch?v=hpDHw…

In particular, I love his statement about seeking positive change and looking for opportunities to “accelerate the inevitable.”

Reading the biography of Elon Musk, for me, recalls stories of Steve Jobs: starting from inauspicious beginnings, being both visionary and unreasonable in the pursuit of a singular vision. We read about his days, decades ago, of creating a startup about indexing businesses that morphs into an online payment scheme, how it competes with, then partners with PayPal. Then, through round-the-clock effort, forceful and sometimes abrasive leadership, pushes his small team to amazing achievements. Sound familiar?

Furthermore, he takes the millions he made from PayPal and plows it back into his childhood dreams: electric vehicles, space rockets in the service of making mankind a multi-planetary species, and now solar power. While his acquaintances look on and laugh at his folly, his persistence, effort, connections, and some amount of luck eventually pay off.

It’s amazing to see how close he came to bankruptcy, not being able to meet payroll for Tesla employees the following month, as he pursued his dream.

I also particularly enjoyed the passages on sending his engineers to Texas, and later, an island in the South Pacific, with prototypes of rockets that routinely blew up and were painstakingly put back together for another trial, on a shoestring. Also stories about how he pushed his engineers to throw out all assumptions about spaceflight, use commercial parts, set unreasonable deadlines, and build a rocket that would be 1/10 or less of the cost of a NASA or Russian launch.

And, he’s still at it, with announcements about the Hyperloop: a 700 mph vaccuum-tube-and-maglev hi-speed transport, and the Boring Company: how he’s planning to drill tunnels under Los Angeles to dramatically improve commute times. Its crazy, until he makes it happen, and then in hindsight, it will have been “obvious” to everyone to do it that way.

I love this guy. Warts and all. It’s not MY leadership style: making unreasonable demands of employees, pushing them to the breaking point, firing them and finding younger, hungrier partners, pissing-off collaborators in pursuit of a vision, but it sure works for him … sometimes.

CMIO’s take? Set a strong vision and pursue it with everything. Grit pays off. Sometimes you should scale your dreams by 10X. If you succeed, wow! Even if you fail and only achieve 4x or 5x, it can still be leaps and bounds beyond succeeding at a “reasonable” goal. And, it is good to read and think about those achieving success in other industries and getting out of your own head.

View all my reviews

The Circle by Dave Eggers

Okay, so Hermione Granger is one of my heroes/heroines in literature, and I’ve clearly allowed my brain to transfer her characteristics to Emma Watson. In my defense, Emma has not done too poorly for herself, speaking at the United Nations and carrying forth her crusade for human rights for women.

I will admit that my interest in the Circle began with a movie trailer featuring Ms. Watson, but that led quickly to my picking up this book.

So, the Circle is clearly a thinly veiled attack on our current technological culture of over-sharing, criticism well documented in The Filter Bubble and The Shallows and others; the pointy end of the author’s critique clearly aimed at Google and Facebook and Apple and Amazon, four of the “Frightful Five” so well described by Farhad Manjoo at the New York Times.

Read this as a novel and you’ll be disappointed. What begins as an interesting premise: the hiring of a new technologist into the Circle (read: Google) parlays into an over-the-top description of a sharing economy, taken to the extreme. I found myself falling out of my “willing suspension of disbelief” that I’m really good at, especially with sci-fi novels. So, not great as novels go.

However, read as a muck-raking, Silent-Spring-like commentary on our uncritical acceptance that “sharing is good,” it is quite sobering. For this, it is worth getting a copy and reading this book. (As an aside, PBS’s recent show on Rachel Carson is great).

CMIO’s take: Yes, this book is pointed at me too. Electronic Health Records open up an entirely new world of sharing, of pattern matching, of machine learning, of revealing behaviors among physicians. These discovered behaviors in the short run, could lead to helpful and/or nuisance reminders to improve patient treatment and care; in the medium term, it could lead to redesign of healthcare organizations to better serve patients; in the long run, it could lead to incredible utopias or dystopias, depending on your point of view. Watch out world…

View all my reviews

So the planning went great. A day at the Rockies game with the inimitable Epic ambulatory team, a cool, hardworking group of young, fast-learning folks.

Word comes that UCHealth is a Rockies corporate sponsor and we have tickets for the team to sit in the Rockpile, centerfield, nonshaded bleachers in 92 degrees. Sign me up!

So, I came in to work early, cranked out some awesome spreadsheets, knocked off early and headed to the game.

Bonus: I planned to park near home and take the new University of Colorado RTD A-train to and from Coors Field.


Here we are! Time for some hot links and beans!
Get up to the famous Rockpile… 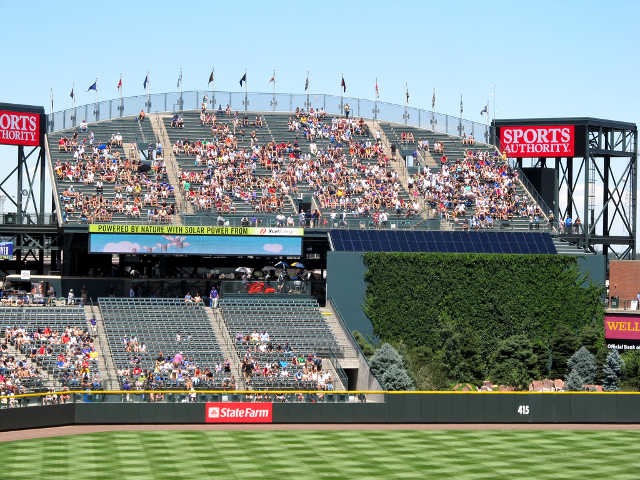 Find my seat, settle in for a fun afternoon…

Hey, where is everybody? I’m only a few minutes late for the 3:10pm start …

Hmm, they’re announcing the 7th inning stretch. Something wrong with this picture. Look at the ticket again. 1:10pm start. Seems that the website was citing Eastern time. 😦

AND, 90 degrees for 2 hours had most folks wilting and ready to head home. Rockies down 2-6 anyway… I had just missed them.

Not everything works out as planned.

Hot tip: do not add insult to injury by missing your train stop on the way home, whilst writing your self-pitying blog post. It could happen.

–Issue: University specialist physicians often forget to write referral letters back to referring physicians and patient’s primary care physicians. Idea: why don’t we automatically route a copy of their note to the referring physician and PCP? Unintended Consequence: nicely formatted, custom-built sub-specialty letters with names and contact info are replaced with the generic letter necessary for the automatic process. After some scrambling, things are getting better.

–Issue: physicians often do not record ‘exercise as a vital sign’ in the patient’s medical record despite exhortations by experts that this could help prompt Americans to exercise more, and track healthy habits. Idea: One of our cardiologists helped build a module to remind docs to do so: type of exercise, days exercised per week, minutes exercised per session. Simple! Elegant! (He wanted to set this as required for all outpatient visits across our system: all 2 million of them per year). Unintended Consequence avoided: our physician informatics team informed him that, until he gets agreement from physician leadership representing the many physicians who would be affected by this one change, we would NOT turn this module ‘on’ as a required element. Whew!

If you’re a parent, think of putting aside your own harried life and occasionally accepting the random invitations that come your way. In my case, that’s an invite from my teenager: “Hey, Dad, lets head over to Red Rocks and see the sun come up this weekend!”

Suppressing my instant “Are you KIDDING?!” response, I thought about it, rolled my eyes, and eventually said “yes.” Sure, the getting up at 4:30am, the inevitable LONG midday nap that follows, the exhaustion… it is worth the look of joy on the face, the teaching of the life lesson, that it can be more important to say yes, to be the ‘first follower‘ (don’t miss this video!) can be powerful, life-affirming, and a way to create a stronger bond with those soon to leave the household.

And, just maybe, the sights are spectacular. Leaving aside the gas-powered air blowers and the leftover “aromas” of excessive alcohol and perhaps other substance use of the night before, its good to appreciate how beautiful a life surrounds us.

CMIO’s take? Despite the grumbling from teenagers about “life lessons from Dad … again,” sometimes, “life lesson” come from following your teens, being open and being willing to be surprised by them. Maybe even substitute the phrase “team members at work” for the word “teens.”